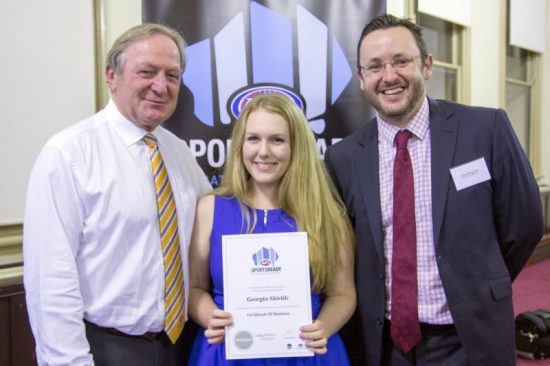 AFL SportsReady’s NSW class of 2014 was honoured yesterday at a special graduation ceremony at the Sydney Cricket Ground.

Taking out this year’s Trainee of the Year award was Georgia Shields of the Profusion Group. Rod Jones, CEO said “Georgia’s incredible can do attitude and creative problem solving has made a real impact around the office.”

“Georgia earned the respect of her colleagues by making a more than significant contribution to the workplace. She is now a highly valued addition to the Profusion Group’s Corporate Support division.” Mr Jones commented further.

AFL SportsReady NSW State Manager Luke Pellegrini said “the class of 2014 was one of the strongest in recent memory, making it exceptionally difficult to select just one winner.

However, Georgia is truly deserving of this year’s top honour and we are excited to see what the future holds for her.”

Graduate Huw Fisher’s contribution to the Manly Warringah Sea Eagles was also recognized, by being awarded the 2014 HostPLUS Rising Star. Mr Pellegrini said “Huw is an outstanding young man who has an impressive sales acumen.”

“Huw excelled in the Sea Eagles’ merchandise department and we are very pleased that he has continued with the AFL SportsReady program and begun a second traineeship with our long term partner, the South Sydney Rabbitohs.” Mr Pellegrini said.

Sheedy also praised the commitment shown by the graduates and highlighted the significant role host employers play in their development. “It’s all about young people. Seizing on the opportunity to make an impact on people’s lives is very important.”

AFL SportsReady CEO James Montgomery said “AFL SportsReady was passionate about helping young people create a rewarding career in sport, business, finance and other industries and we have recently expanded into the arts and creative sector through a new specialised program, ArtsReady.”

“We are proud to work in partnership with businesses and organisations across NSW to ensure all graduates have the best chance of success in their chosen career.”

“The completion of their studies, whether it be at Certificate or Diploma level, along with the invaluable experience of a traineeship, will provide our graduates with a strong foundation for their future careers.” said Mr Montgomery.

“The graduation ceremony is a fantastic way to recognise the achievements of these graduates, who have all worked hard to achieve success in their chosen areas, and we wish them all the best for their future endeavours.” said Mr Montgomery.