Proud Aboriginal and Torres Strait Islander woman, Stephanie Rogers, was recently awarded AFL SportsReady’s  2020 Indigenous Trainee of the Year award for Queensland.  She believes that her traineeship has provided her with an abundance of opportunities, a full-time career at the Commonwealth Bank (CBA) and has empowered her as an Indigenous woman and a single mother.

“Being a single mother to a little girl just over the age of 1 meant that I hadn’t worked for a long time. I felt I was ready to start my career and I saw the traineeship opportunity as the perfect way to do so,” said Stephanie.

Stephanie started her traineeship in 2017 at the Commonwealth Bank branch in the Gold Coast and studied a Certificate III in Financial Services.

“The traineeship was really empowering for me, it gave me the ability to work, to study, to train and to still look after my little girl.”

Stephanie’s ancestry is from Thursday Island which is part of the Torres Strait Islands in Northern QLD. Her Nanna May was a part of the stolen generation and at a young age was taken to Cherbourg QLD where she started a new life.

For Stephanie, her heritage is integral and so taking on a traineeship at AFL SportsReady allowed her to embrace her culture and work alongside and meet other young Aboriginal and/or Torres Strait Islander young people.

“One of the biggest highlights about my traineeship was the Aboriginal Gathering.

These gatherings are held every year and give Indigenous trainees an opportunity to come together and share their stories and journey. It was a truly inspiring experience and through this gathering I met another trainee who was on a similar journey as I was, Piari Anderson, and we are still very close friends to this day.”

In her two-year traineeship, Stephanie took on a Customer Service Representative role at the bank where she focused on bank telling, cash transaction and working with clients.

“It was an amazing traineeship experience from start to finish and what really stood out to me was the support I had around me.

I had the support of my AFL SportsReady Field Officer, Kylie, who was an incredible leader, my Mentor, Malita and my Educator, Shirley, who all guided me through every step of the way.

The time and effort they put in was second to none and I am so thankful.”

Through her journey, Stephanie not only worked at CBA, studied a qualification and cared for her little girl as a single parent but also was training for a bodybuilding competition which she came 6th in nationally.

“I would wake up every morning at 5:30 am, do my cardio then prepare for the day, drop my little girl off at kindy and start work at 8:00 am, work all day then pick up my little girl in the afternoon and train. It was hard work, but I managed to do it all to the best of my ability.”

Stephanie embraced every single moment of her traineeship despite her busy life. She stayed passionate, dedicated and motivated and never gave up even if life became overwhelming. Her incredible efforts were admired and at the end of her traineeship she gained full-time employment in addition to winning the QLD 2020 Indigenous Trainee of the Year Award. 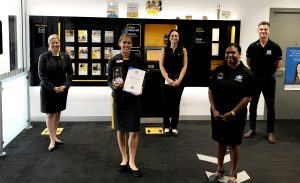 “This whole experience has been unbelievable to say the least.

I just couldn’t believe where my traineeship had led me and I had no idea I would be in this position today, to be working full-time at the branch and receiving this amazing award.”

With the cancellation of this year’s graduation ceremonies due to COVID-19, Stephanie was presented the award in front of her colleagues at the CBA branch by QLD State Manager, Luke Morgan and Mentor, Malita Sagaukaz.

“It was overwhelming, and it was totally unexpected, but I am so happy, excited and proud of myself. I worked really hard through my traineeship and I felt truly rewarded.

In her current role at the CBA, Stephanie will now be mentoring a new young Aboriginal and/or Torres Strait Islander trainee who has just come on board the team.

“I stand here as a proud Indigenous woman and I feel empowered and strong and grateful for the opportunity to have not only launched a career but secured a career with the bank. There are opportunities out there, so why not take them or tell others, so we never stop supporting each other and the community.”

Check out what else is happening at AFL SportsReady this NAIDOC week here.

IMAGE: Stephanie with her daughter, Amelia.