Dreams of the Country Life 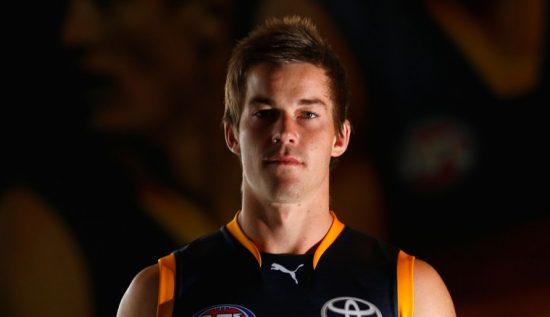 Dreams of the Country Life

This year Nick Joyce completed more than 100 hours working on the family farm as part of the AFL Players’ Association and Sportsready Next Goal program.

Nick Joyce won’t mean much to footy fans, some might recognise the name, but most won’t be able to place it. That is unless you are asking a Crows fan or punch his name into Google, but only when alongside the words Kurt and Tippet. Unfortunately for Joyce, his most notable contribution to the AFL so far is as the fall guy in the Adelaide Crows- Kurt Tippett salary cap saga.

Forced to cut a player, the Crows delisted Joyce after just one season despite having a year to run on his contract. He had an anxious wait before the Crows reclaimed the 19-year-old in the Pre-season Draft. While it’s not something a young kid trying to make his way in the game should have to go through, Joyce put the experience behind him and used it as motivation for the 2013 season.

But football can be a cruel game and almost 12 months and 14 games later, Joyce is nursing not one, but two injured shoulders and facing seven months of rehabilitation. It’s circumstances that might cause many to want to throw in the towel, but not Joyce. Then again, he is not your average AFL footballer.

Throughout the challenges he has faced in the past 12 months there has been two constants maintaining Joyce’s focus, his Christian faith and the country life. Joyce is a country kid living only temporarily in the big smoke. Born and raised in country South Australia, specifically Wandereah, just outside of Port Pirie and two hours from Adelaide.

He moved to Adelaide to pursue a football career with the Woodville West Torrens Eagles at 16 years old, but it’s fair to say home is where his heart will always be. “I plan to be back on the farm helping out and one day hopefully running the farm with my brother, Tom. That’s the dream,” the 19 year old says.

“Being able to walk out your door and go to work and always being around your family, it’s just a good lifestyle, very casual, but also very rewarding as well.” This year Joyce completed more than 100 hours working on the family farm as part of the AFL Players’ Association and Sportsready Next Goal program.

He returned home one day per week during the season to do some hard yakka alongside his dad and uncle. “I’ve missed a fair opportunity to actually be out on the farm and learn. Now that I’m back, it’s been a great opportunity to get back and learn and pick up where I left off a couple of years ago, before football got serious.”